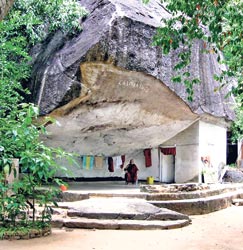 Built in the First Century BC by the Queen Rajitha, the main wife of King Dutugamunu Piyangala Forest Hermitage remain a monastery up to today standing strong despite the thirty year war that stormed the Eastern Sri Lanka.

Situated on a peak, the monastery is small in size compared to the other monasteries in the area. A stone paved path leads to the entrance of the monastery, which consist of a unique 100 feet long walking path designed for meditation. Spread with white sand and paved with granite the path leads way into the forest assisting generations of meditating monks in their pursuit for the end of samsara.

A further way up the mountain leads to drip ledged caves of the meditating monks. Simpler in design  the caves contain stone inscriptions detailing the donation and donator while some also carry drawings of forest dwelling vedda groups, who made the caves their home after the fall of the original monastery.

The main cave of the hermitage known as the ‘Utharagutha theraha lena’ stands top of the mountain accompanied by another 20 odd caves is believed to have been used by a renowned arhant in the East during the first century BC known as, Uttara Gupta Thera.

The caves are accompanied by moonstones built in the fourth century and a carved foot mark of Lord Buddha while the Bodhi tree and stupa found in the premises are relatively new compared to ruins scattered around.

Spreading over 200 acres of forest land, Piyangala forest  hermitage was the victim of a thirty year old war, rock quarry as well as a series of damning forest fires. Yet it stands even today reminiscent of a monk in Samadhi, who is in harmony with life’s peaks and falls.