Built nearly 2400 years ago during the regime of King Devanampiyatissa, Pillikuttuwa Rajamaha Viharaya was a monastic meditation complex with 99 caves spread over 200 acres. Its’ majestic history of Sri Lankan Buddhist tradition is evitable at every step including its structure and flora around it.

Situated along the Colombo-Kandy road just a short turn off Miriswatte junction, the cave complex was initially built to house the mediating arhants in a serene environment. The temple had been repeatedly renovated since its establishment with King Walagamba adjoining more facilities to the complex nearly 1100 years back. The Brahmin inscription on the top of the rock stand witness to the donation of Pilikuttuwa to the Buddhist monkhood adding that the temple was donated to the Sanga of all direction and of all periods.

In the lowest levels of the temple is the ancient stone pond, Bodhi tree, Vihara lena or the cave that houses the shrine and the chaithya  lena or the cave with the stupa. Archeologists believe that these cave were initially constructed with the distinct drip ledge to house the meditating monks and were later converted into  a shrine room and a house for stupa  with the decrease of number of meditating monks at the temple. 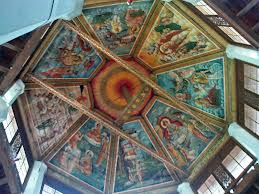 The image house is unique for its use of two drawings of Portuguese soldiers to guard the doorway in the place of Doratupala statues as in the early periods, suggesting the shifting of powers and the era of  renovation. The ceiling of the rock cave is decorated with the typical Kandyan art decorations of elaborate lotus flowers while the reclining and sitting statues are of Polonnaruwa period.

One the next level is the Devala Lena or the cave of gods, monks abode, dining hall and the bathing well all built into or built inside caves. An ancient wooden bridge across a small stream between two caves is another quaint sight in Pilikuttuwa.  Having its origins in the Dutch period, the wooden arch, the wooden pillars, the wooden trellis, the wood plank flooring and the tiled roof amidst the looming rocks reminds of a Dutch among Sri Lankans, strange and foreign.  The subterranean waterway that runs under its planked floor can only be heard rushing off to join the Pilikuththuwa wewa.

Providing backdrop to the Pilikuttuwa Rajamaha Viharaya is the Pilikuttuwa rainforest reserve with its lush layers of flora and rich biodiversity. Its prized members are the 500 year old Pilikuttuwa Yoda Puswella or a giant pus creeper found in the temple vicinity and the large number of bird species breaking the serenity of the temple.